Father, a two person show with Thomas Brezing and Klaus Effern, was first exhibited at Lapua Art Museum, Finland from 9th February until May 14th 2016 and then at The Old Church of Isokyro, Finland during August of 2016.

Father, forgive me …
Why are there so many boys in the world who destroy even though already in the beginning of time the Heavenly Father gave man the possibility to do the same thing he himself liked the most - creation?
Men have both sides, father and son – and a constant choice manifesting itself in deeds. The choices are say, threat, violence or guidance, presence, respect.
Will I learn to be silent and hate or will I teach to talk and love? Will I go down the path of destruction or will I send out to build?
How vast is the invisible flow in the world whose decisions are guided by the lack of a father in all its forms?
“Creation is the only reasonable substitute for violence and hoarding material possessions. This concerns everyone. The goal is that no one is left a bystander but everyone strives to use their freedom to give democracy a sense that strives to transform the contents of human life into a piece of art.” (Jacques Attali)
The strong message of the exhibition and my discussions with the artists brought to mind thoughts of the father-son relationship and the choices that we, as fathers and sons, make. As they are repeated, our deeds as well as the things we do not do, have an impact on the entire world in both good and bad. This ”bleeding wound” is one of the motifs of the exhibition.
This year Lapua Art Museum celebrates its first ten years and ever since the very beginning, exhibiting art from abroad has been one of its policies. This has been carried out in cooperation with the European twin towns of Lapua. It has meant building onto an existing foundation through consistent interaction.
The process of the ”Father - Isä” exhibition began in 2012 when Thomas Brezing (born 1969 Germany/Ireland) met Klaus Effern  (born 1967 Germany) and continued in June 2014 with a residence period in Lapua.  During the residence the artists also visited the Medieval stone church of Isokyrö. In collaboration with Vicar Artturi Kivineva it was decided that Klaus Effern’s wooden sculptures would be brought to stand alongside the German sculptures of Saints and Thomas Brezing’s paintings to have dialogue with Bible story images circulating the church walls. One could say that this is an example of history repeating itself, with a time span of 600 years.
The actions of the Kulturkirche St. Stephani Bremen, Germany, served as inspiration to take the exhibition to a church also here in Finland. Due to the special nature of the church space it is essential that the exhibition seeks dialogue with the space and based on that, also the viewing public. This was the basis when we contacted Juha Rintamäki, the vicar of Lauttasaari in Helsinki, and enquired about the possibility of an exhibition. He then promised to discuss the matter with other parishes in the capital, too. The outcome was that ”Father – Isä” will be exhibited in the churches of Lauttasaari as well as Kallio, however with different contents due to a number of different factors.
Art is a manifestation of creation which makes the invisible visible for the receiver through an artist. In his mind, he creates a new invisible world based on his experiences using it to construct himself and, in the best case scenario, his community. It would be good to see such creation increase in the world.
Esa Honkimäki Cultural Director, Lapua (catalog essay 2016) 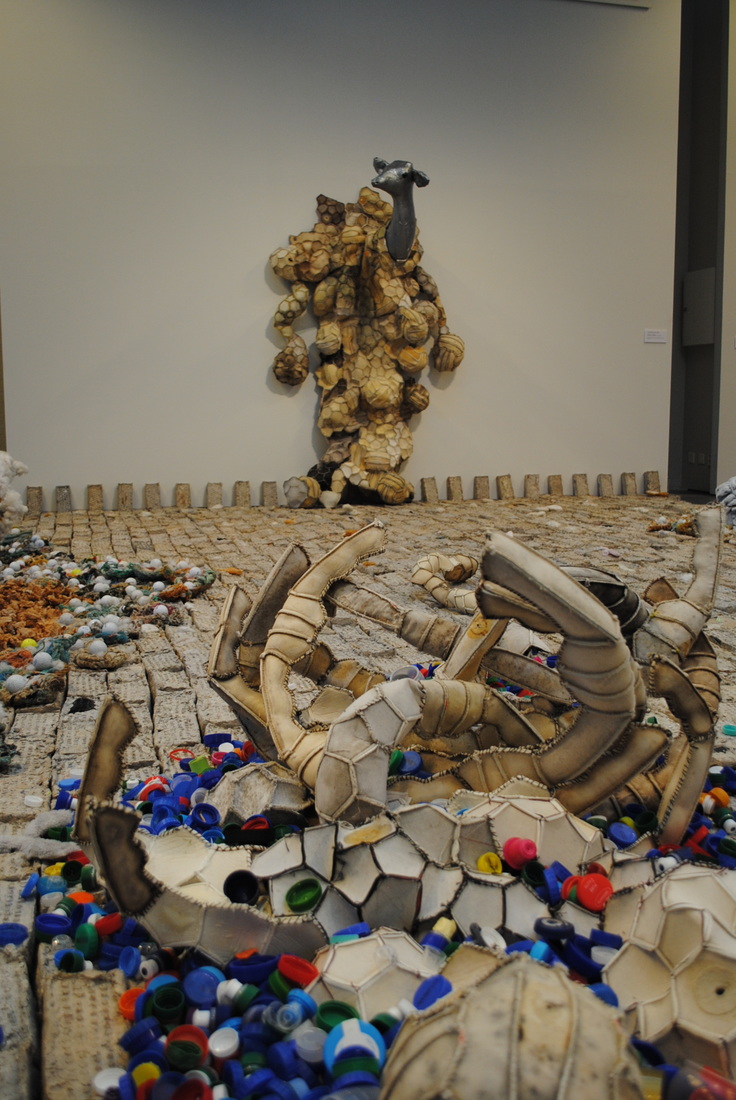 
From invisible to visible
”In the beginning was the Word.”
What about image? Was it perhaps simultaneous or even older? At least the oldest man-made images are petroglyphs from tens of thousands of years ago. We don’t exactly know the temporal relation between word and image but it can be assumed that image is the earlier form of expression.
In the Old Testament the law of the Ten Commandments forbade man from making an image or any likeness of God nor heaven (Exodus 20: 4-5). However, the history of the creation says that man has been made in the image of God. Christian incarnation doctrine means that God became man, He became flesh. Christian art and actually the entire tradition of Western art has been developed based on the incarnation doctrine. In my view, the image ban speaks of the fact that it is impossible for us to try to capture God into our own definitions and truths. Even Moses was denied the chance to see God in the desert. God is and shall remain an eternal mystery, just like man. And if man seems to have deep contradictions, the same contradictions will also be discovered in God.
Klaus Effern, the sculptor of this exhibition, is yet another ”incarnator” with his artwork. He says: ”I form a picture of the state of man. We are full of contradiction.” Effern and his partner in this exhibition, painter Thomas Brezing, say that their artwork has a common origin in ”Father”, in other words the father theme. The theme tells of becoming human but also of the contradictions we face as fathers and children.
Faith and image have travelled side by side for a long time, completing and, at times, contradicting one another. It has in fact been claimed that images have brought oneness and cohesion into the history of faith and doctrine. Images may have unifying power and they can convey messages more efficiently than words – to make love visible, as Thomas Brezing feels.
The Lutheran culture has been culture ruled by word. The leading thought for this has been the word of Paul: ”Faith comes from hearing…” In this way we have been more Jewish than Greek. The Jewish culture has been characterised as a culture of the ear in which moral prevails whereas the Greek culture has been prevailed by aesthetics, beauty than can be perceived with eyes. And yet for Paul, seeing was the highest objective: ”For now we see in a mirror dimly, but then face to face.” (1. Cor. 13:12).
For Reformer Martin Luther, word was the conveyor of the gospel, not image. In his opinion, images required explanations – words, in other words. The history of the Christian church has seen many disputes over images and the reformation lead to the aesthetics of the churches being simplified. Images disappeared from churches. This happened also in the Old Church of Isokyrö where the images painted in the 16th Century where covered during the purist era. The images have been on display now again for more than a hundred years, and it is thanks to the very images and sculptures of Saints that the Old Church is very exceptional today. The Word is alive as the images and the images are an interpretation and an explanation of the Word. Our culture, anyway, is very visual.
What is religious or Christian art? Do such things exist? Many think that art is religious or Christian if the motif is religious or Christian. Still, for example, art that preaches is rarely good whereas at best, good art manages to preach. The possibility and being of Christian art is crystallised in Thomas Brezing’s idea: ”If the world were perfect there would be no need for art, so art is a witness to both our broken world and hope for its redemption.” The world must be depicted as it is – not smoothed out and covered with a pious frosting. Nothing should be consciously ignored or covered, fixed or beautified. Contradictions and darkness must be visible and the world must be depicted entirely as God’s world. A part of the contradictory reality is also the fact that hope may be created by portraying it negatively, as so often has been done in visual arts, too. Hope may arise from acknowledging the hard facts of life. We must accept that we cannot solve the issue of suffering. Hope cannot be artificially created, it must rise from within, and images can be tools of awakening the hope for us. Christian hope means that we have a new future and that God – Father – has not abandoned this imperfect and contradictory world.
Artturi Kivineva, Vicar of Isokyrö (catalog essay 2016) 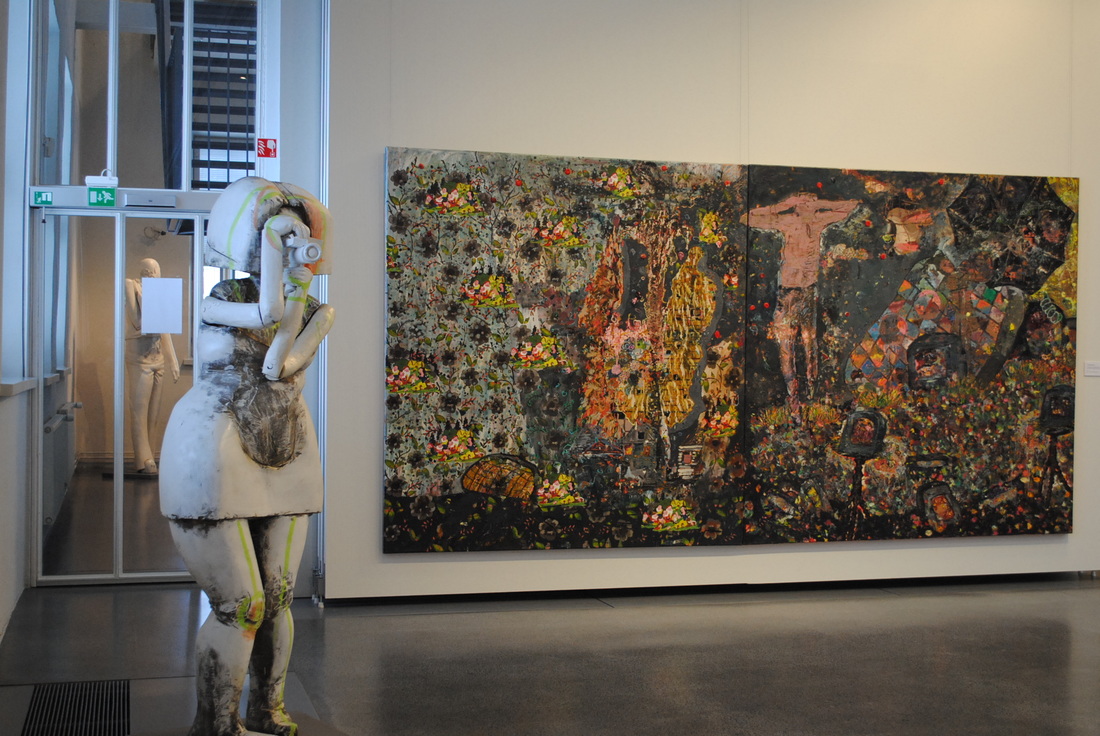 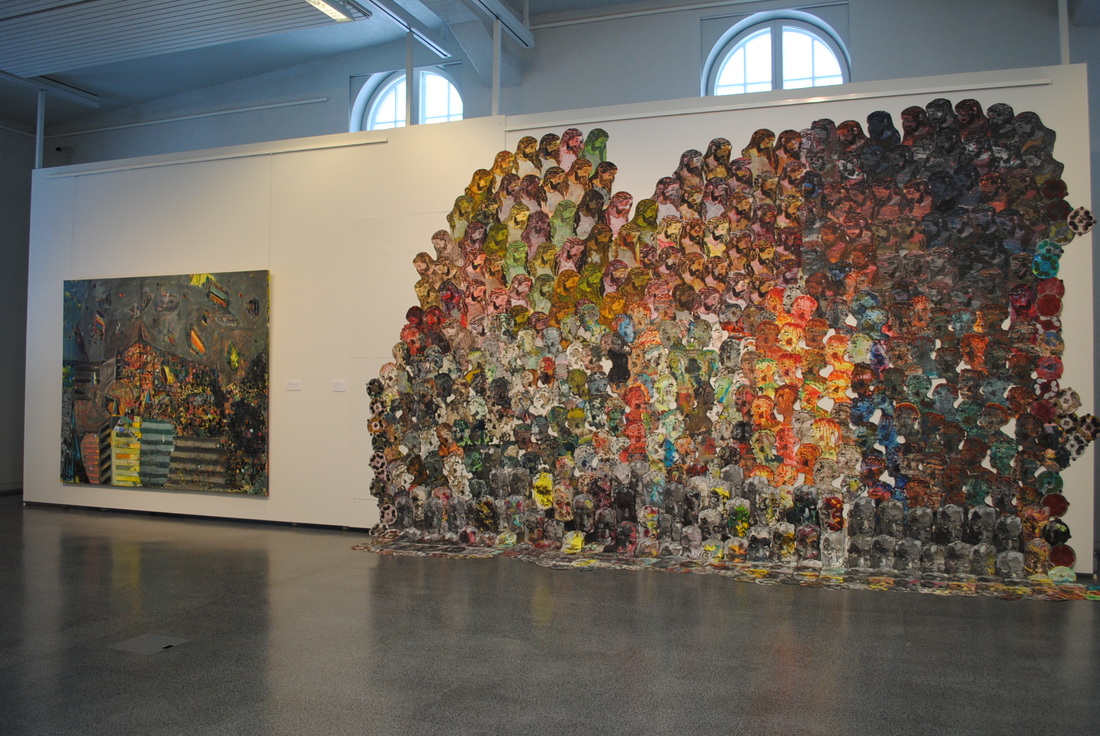 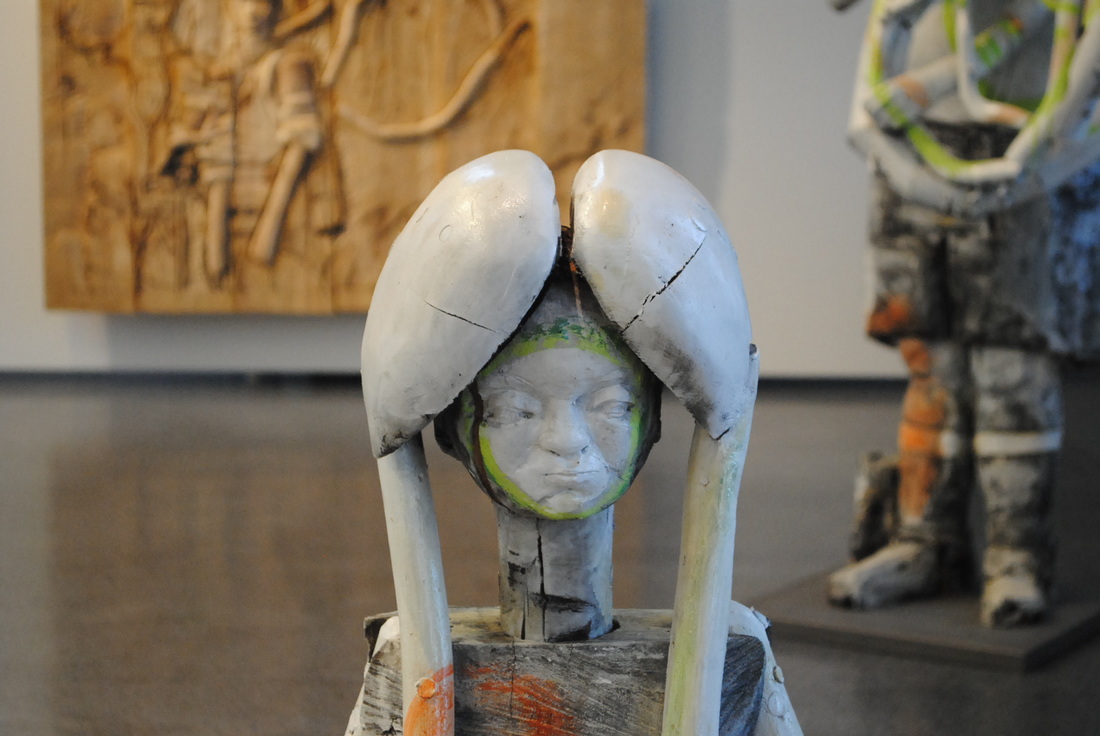 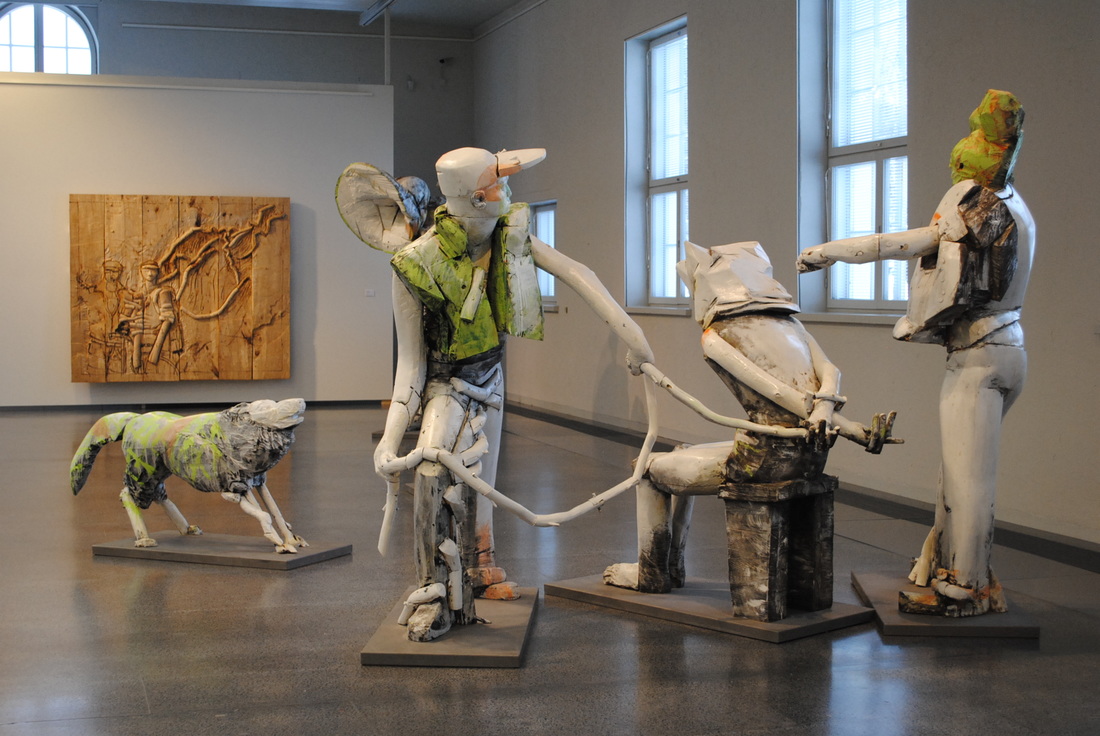 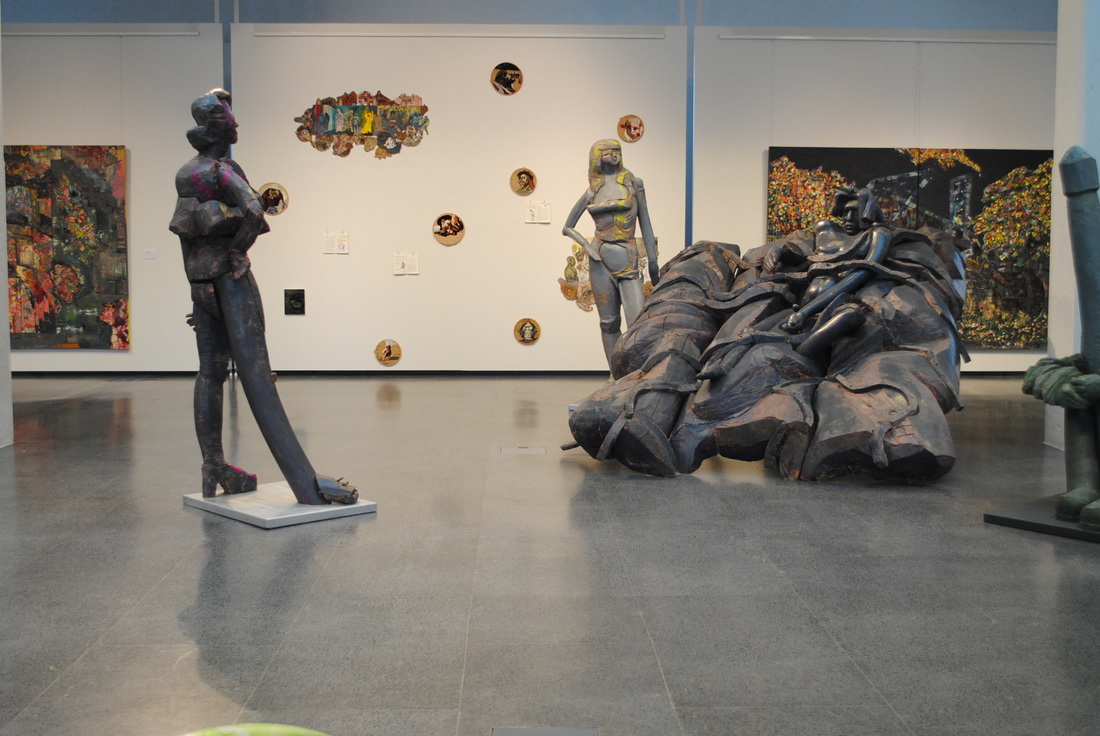 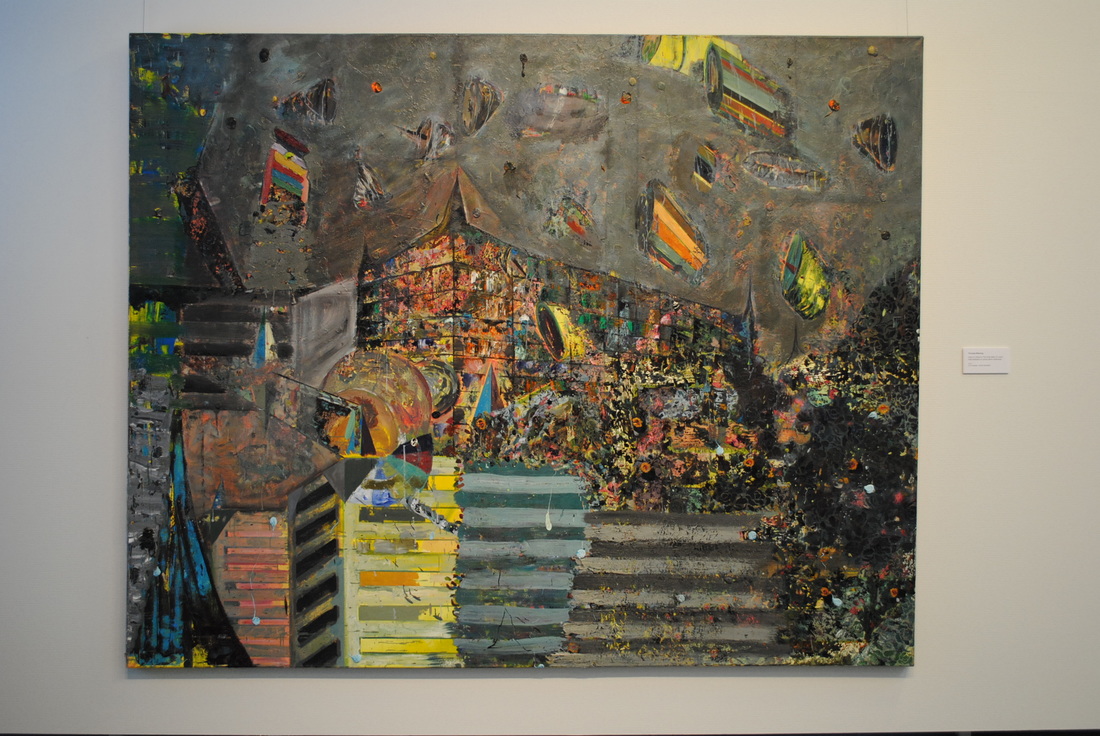 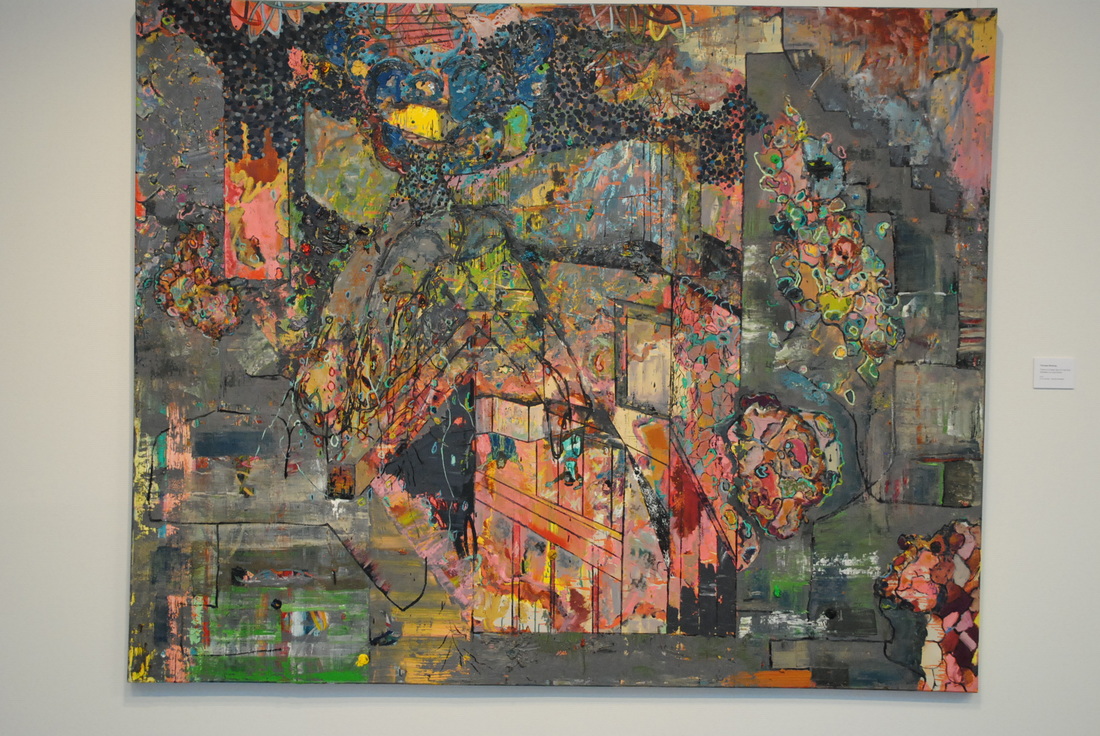 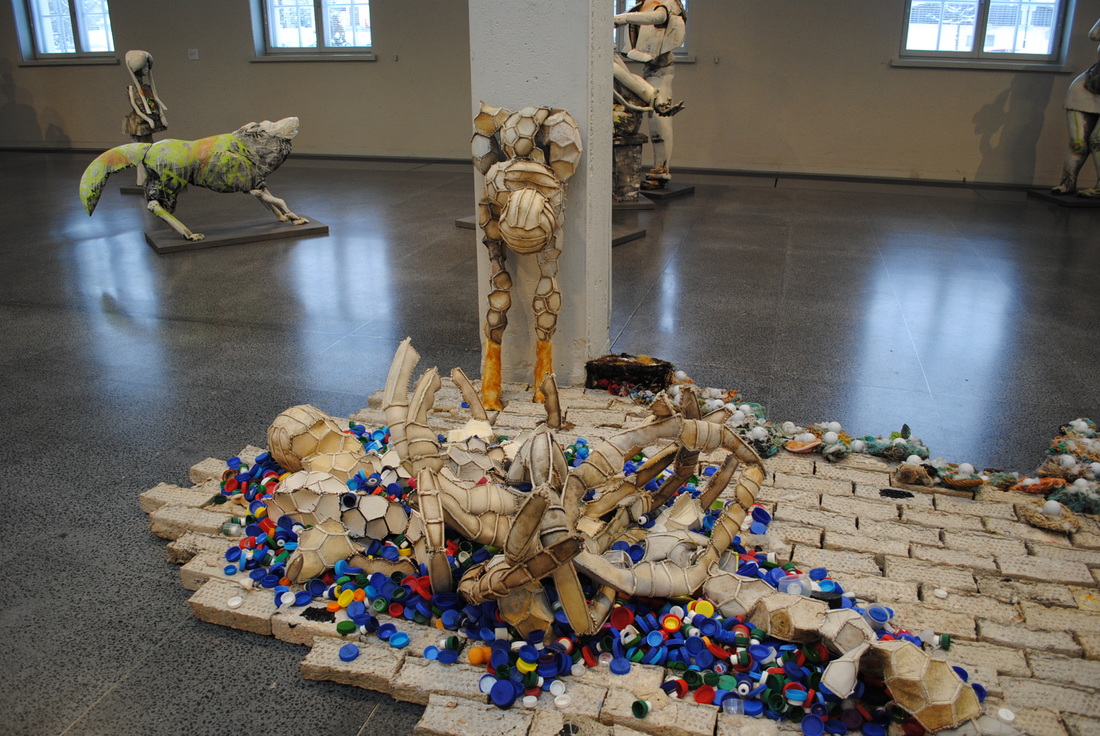 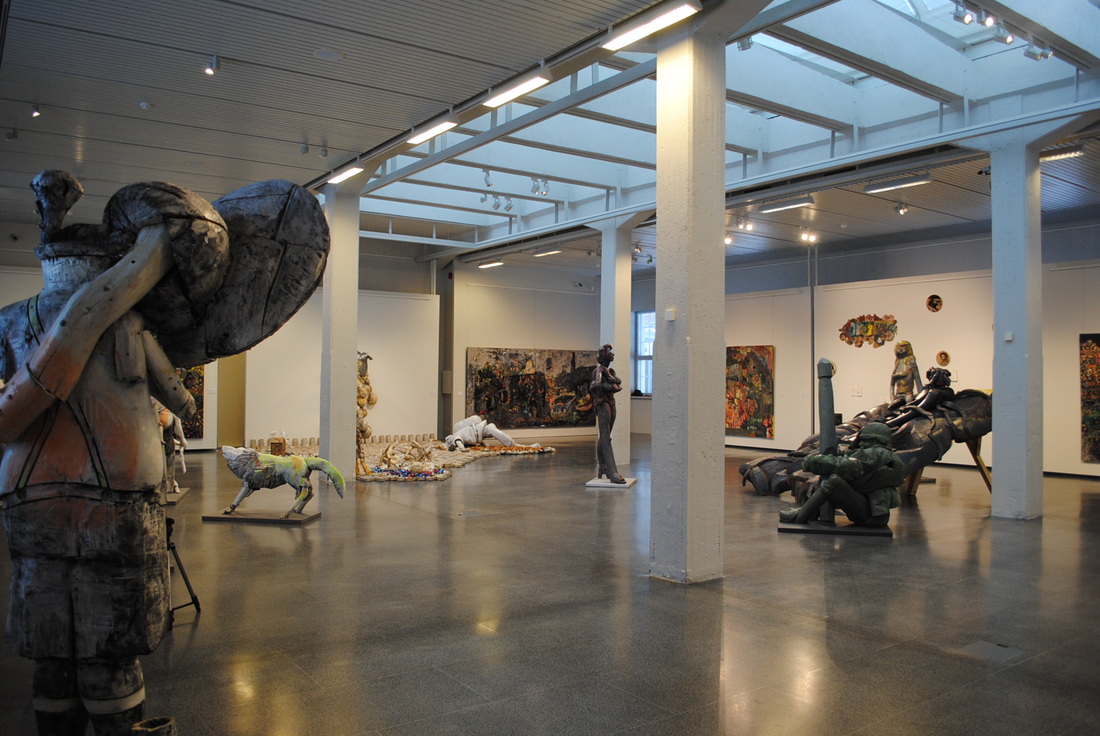 
Then the exhibition went on to The Old Church Of Isokyro, Finland, 1st July - 21st August 2016 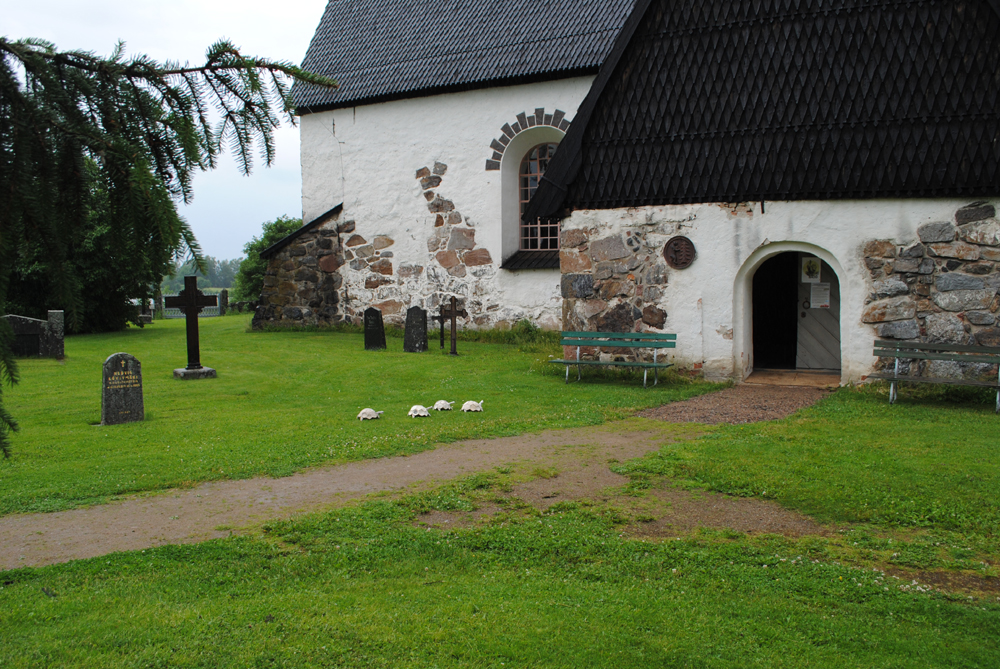 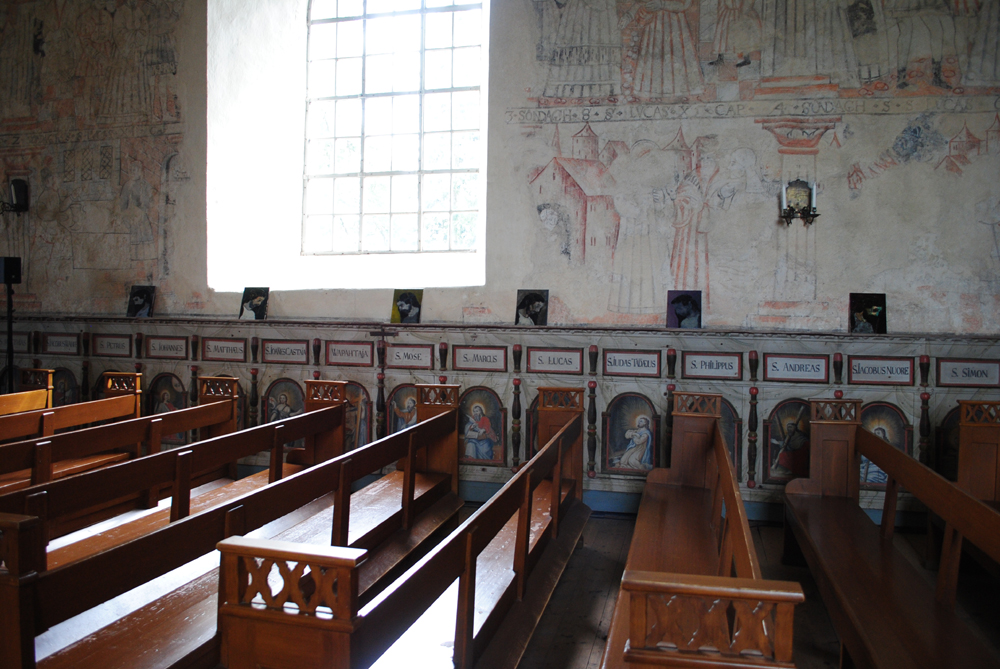 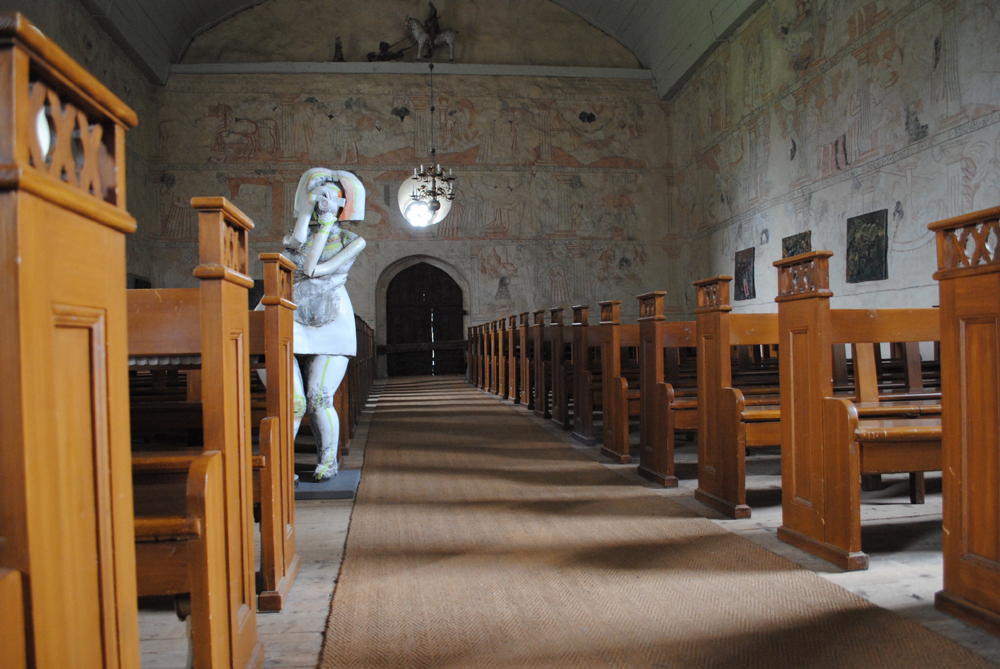 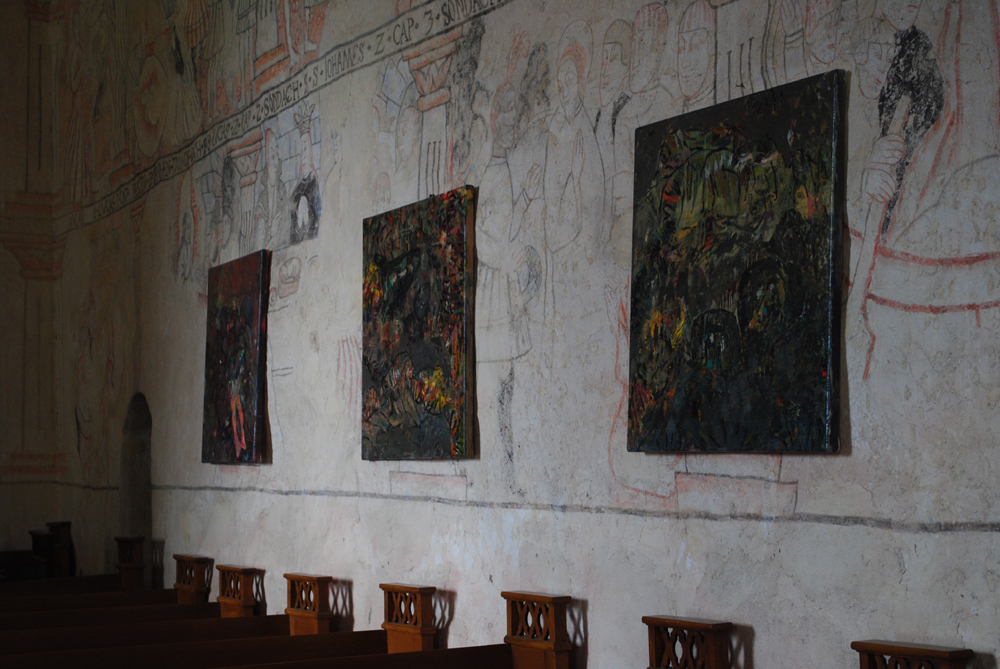 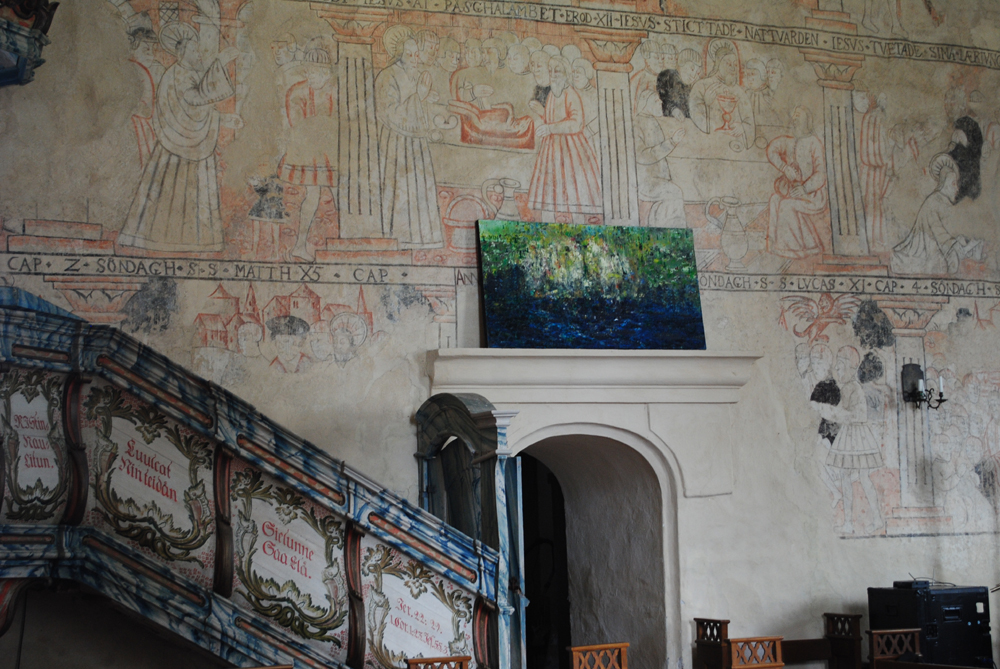 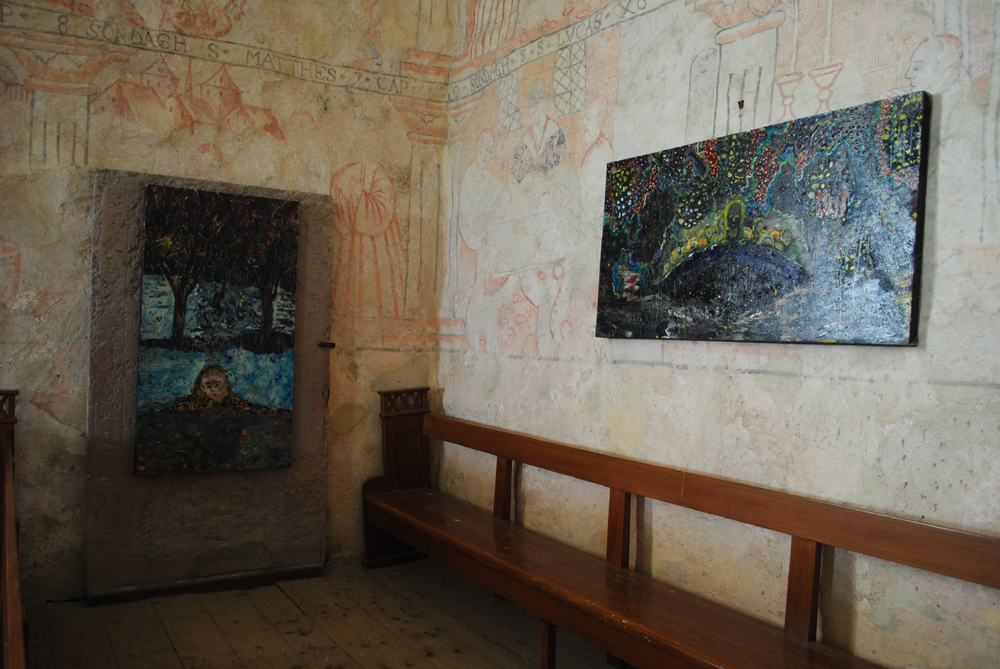 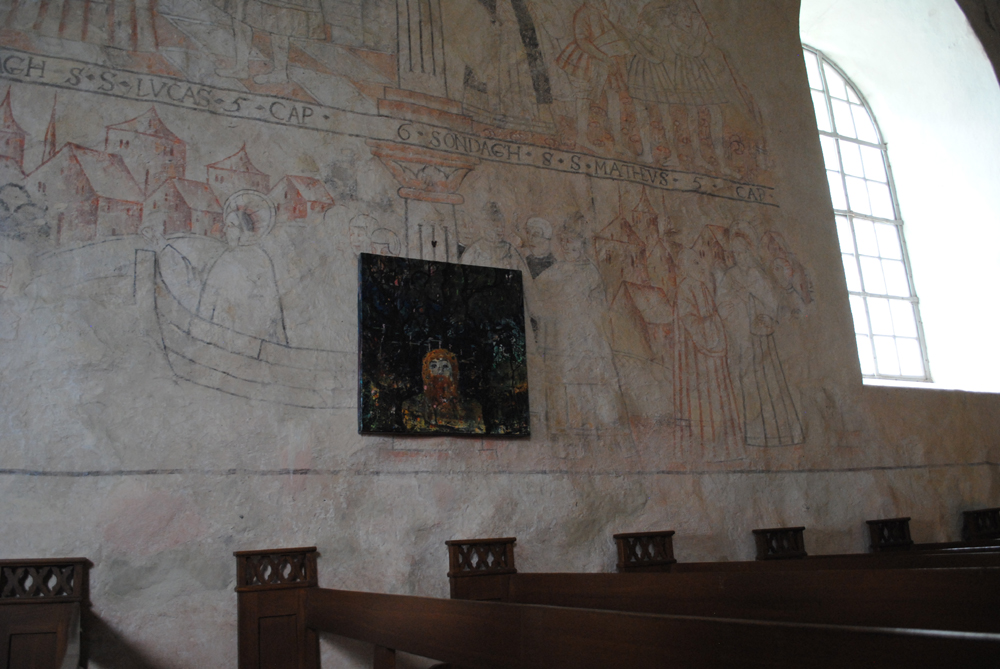 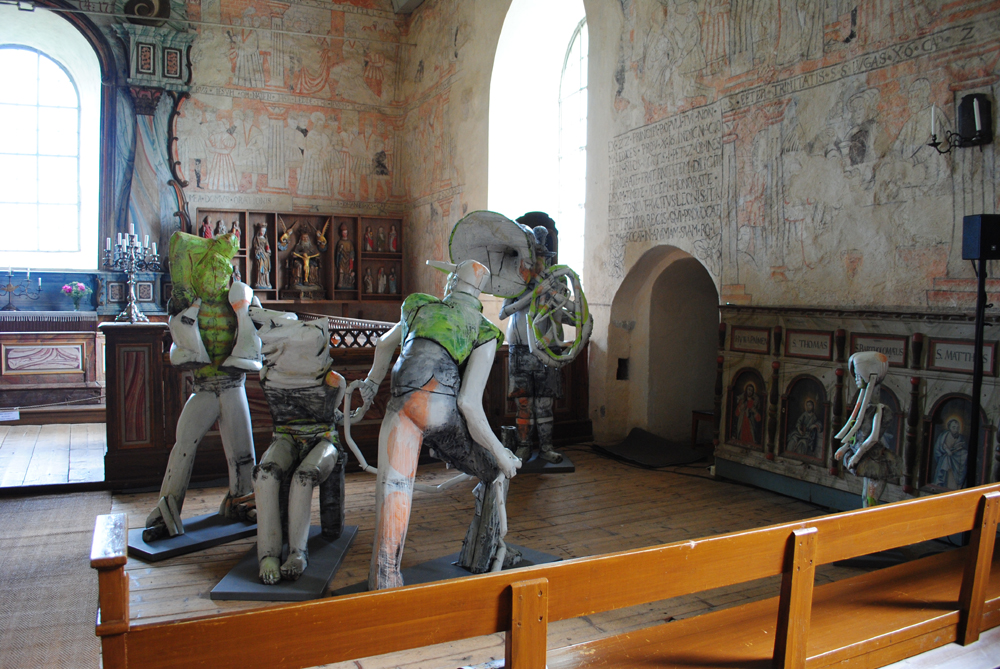 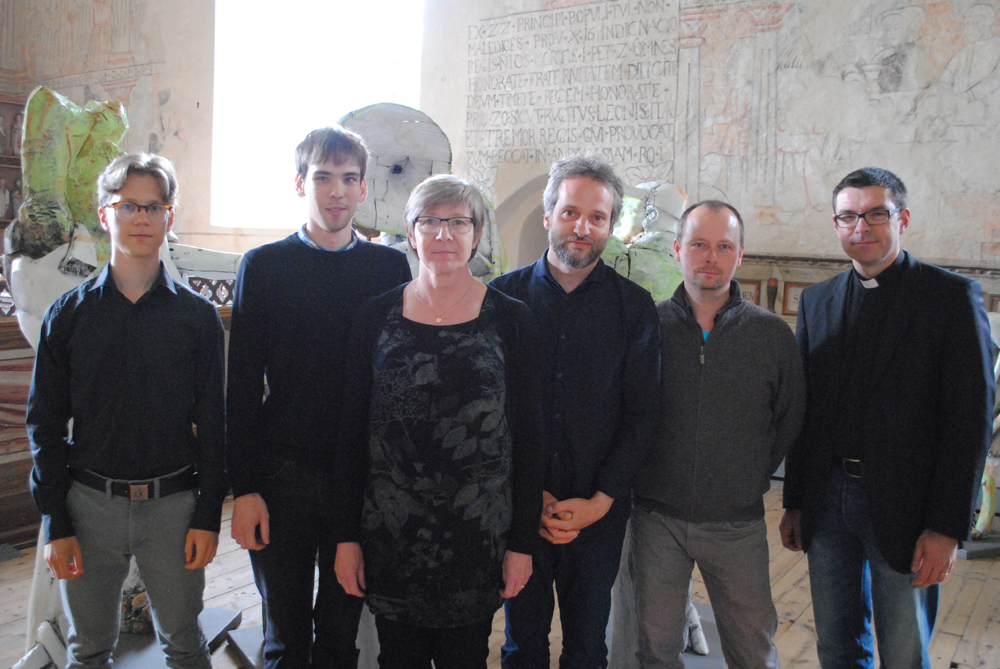 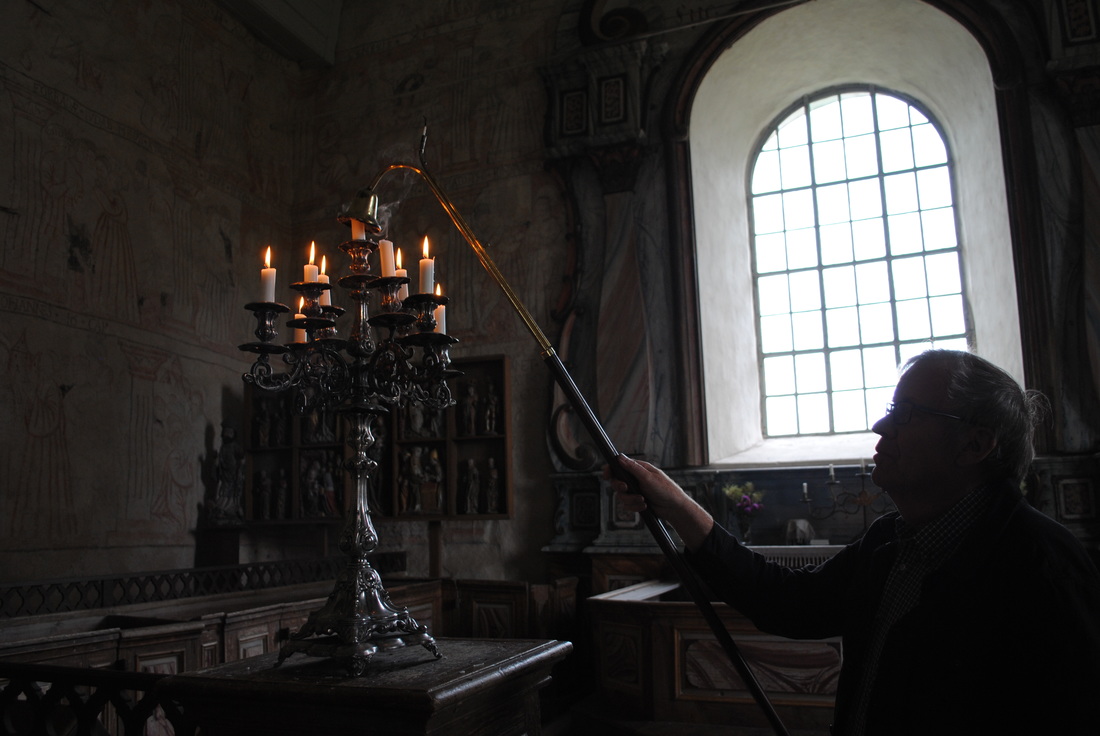