‘In my art as in my life I am attempting to find and to create space. This search is a constant challenge, as every painting seems to resist conclusion and closure and the discovery of space’
Thomas Brezing 2018
This September at the Molesworth Gallery, artist Thomas Brezing will present a body of new paintings, entitled ‘Anvil Dust’. This will be his fifth show at the Molesworth since 2008. Thomas moved to Ireland from Germany more than two decades ago. He now lives and works in a coastal setting of north Dublin.
Thomas is an artist who has undertaken a rigorous investigation into his practice over the last number of decades; he has emerged as an artist in his middle age, with a reputation for authenticity and truth, a strong personal philosophy and as a maker of complex and challenging works.
I have known of Thomas Brezing and his work for many years, but it is only in the last number of years that I have had the opportunity to meet and visit with him on a more regular basis, in my role as arts officer for Fingal County Council.
In the winter of 2016, Thomas took up a residency in the newly re-furbished boathouse studio in Loughshinny, on the coast of North Dublin. He returned again in the spring of 2017.  At that time he was challenged to respond to the local maritime environment, out of this Thomas created a work entitled ‘Out too far (Wishing too many things)’. This work included a large whale like skeleton made from sewn inverted GAA leather footballs, placed over piping, to create large rib cage like circles, when complete it was placed on the beach at the tide line. The work was accompanied by a performance by his living sculpture, Carpet Man, a walking roll of carpet pulling a rope line of flotsam behind him, a stumbling Beckett like figure, blinded and silent, a witness to our indifference and culpability. These themes and concerns continued into the works in this exhibition.
In my visits to his studio in the lead up to this exhibition, I see ideas and paintings in an emergent state, at their first outings. I have learned that this is a delicate and transitionary stage, as most likely they will have been much altered when I see them again. Thomas has a strong opinion with what most people would regard as traditional beauty in painting. I think he may see it as interference or perhaps a decoy which distracts from the paintings more important concerns and is part of his unwillingness to pander to visual tricks and clichés by taking the easy way out of solving a painting problem. He is his own stern critic and overseer.
‘‘Every painting is a new attempt at painting an 'empty' grey canvas/space/place - the grey being a grey such as anvil metal dust ground between the fingers, entering the pours of your hands. No painting of mine has ever come close to it - every painting ends up being busy. Perhaps this search for place and space is also a search for identity and home.’
Thomas Brezing 2018
I saw the painting ‘Father-This is your Anvil Dust’, in its early stages, a large canvas with a quickly painted anvil at its centre. This is a direct reference to Thomas’s father, who was a master blacksmith. We discussed memories of our fathers, and Thomas’s difficult decision to break away from his family’s trade and strike out on his own. I saw this painting many weeks later and was happy to see it now reworked, the anvil had survived, homage to his father.
‘Hand in hand is the only way to land’  has a sense of grandeur about it, there are steps in the foreground leading up to a building, a place of ceremony maybe, a temple like building,  adoration and reverence, are recurring themes I see in this exhibition.
‘The Future May Not Need Us’ depicts blanket covered figures huddled in a landscape, waiting. ‘After the Heist’ people are seen trudging forward, resigned and walking in lines, in the open. ‘A boat to an island on the wall’ may be a reference to the plight of immigrants travelling attempting to gain entry.
In some of the smaller paintings, there are Buddha like figures silhouetted and seated, immersed in a state of contemplation in ‘Last night I said sorry to a painting’ and ‘I do not want to disturb your daydreaming’ there are themes of fantasy, devoutness and unworldliness, nature is ever present, with birds and trees framing many of the works.
There is a direct line from Thomas Brezing’s work back to German Expressionism painters, Nolde, Beckmann, Grosz, and in the context of Irish Expressionist painting and the 1970’s resurgence in figurative, expressionist painting; there is also a link to the Paddy Graham, Brian Maguire generation.
‘Anvil Dust’ is a welcome and important opportunity for the public to see into the work of a notable artist working at this time, the works are accessible and recognisable and there is passion here. The meanings of many of the works may remain intangible; and there is an overriding sense of melancholy, what you are left with is a mood or atmosphere rather than a meaning. 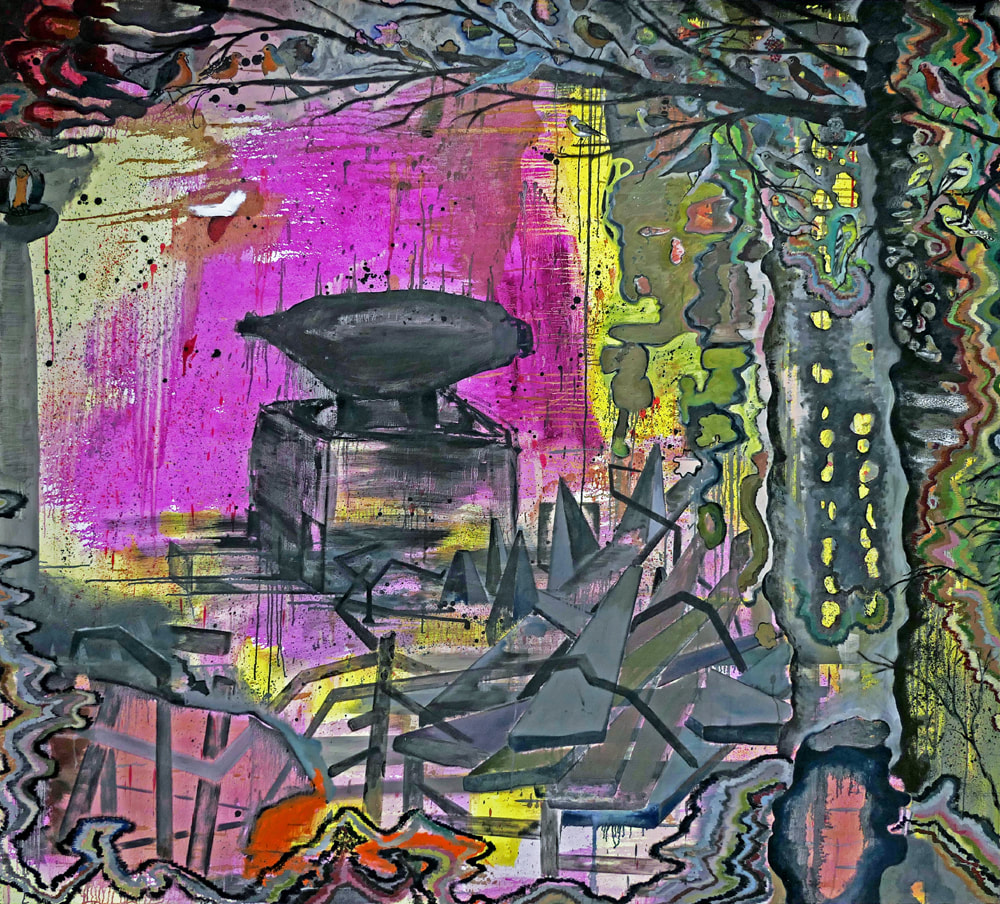 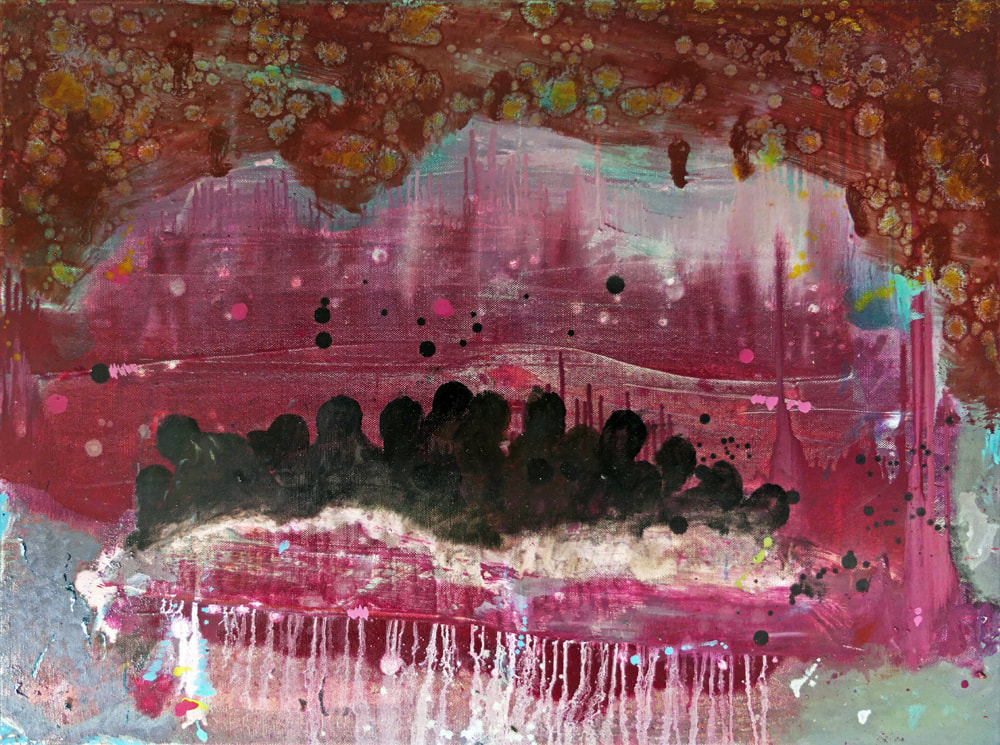 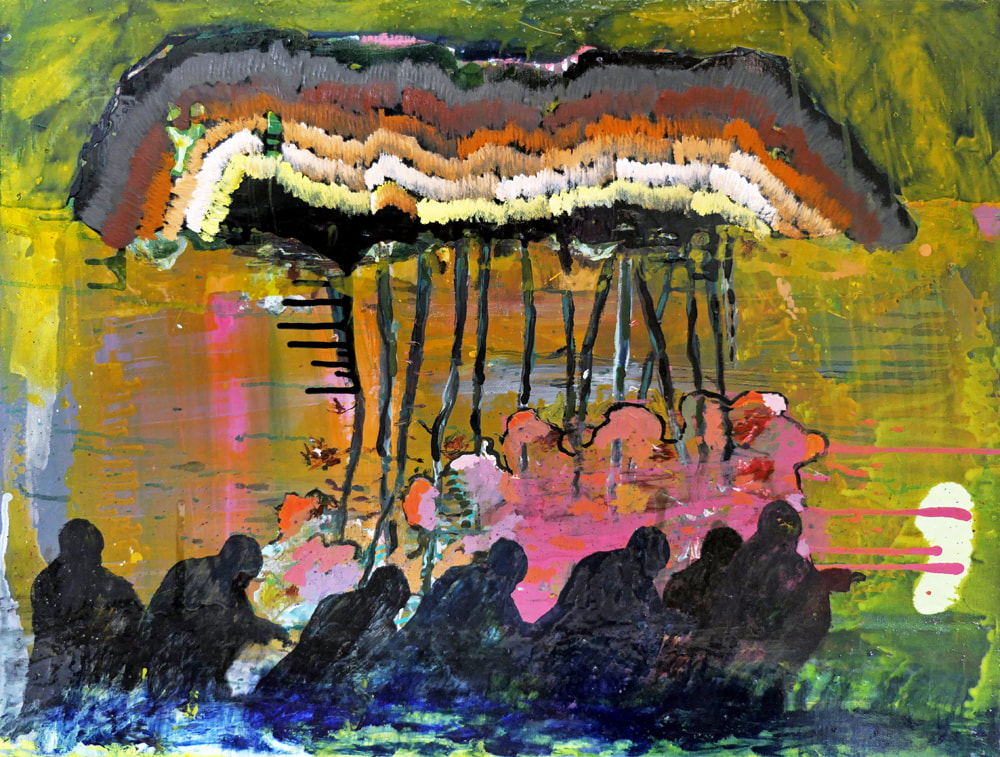 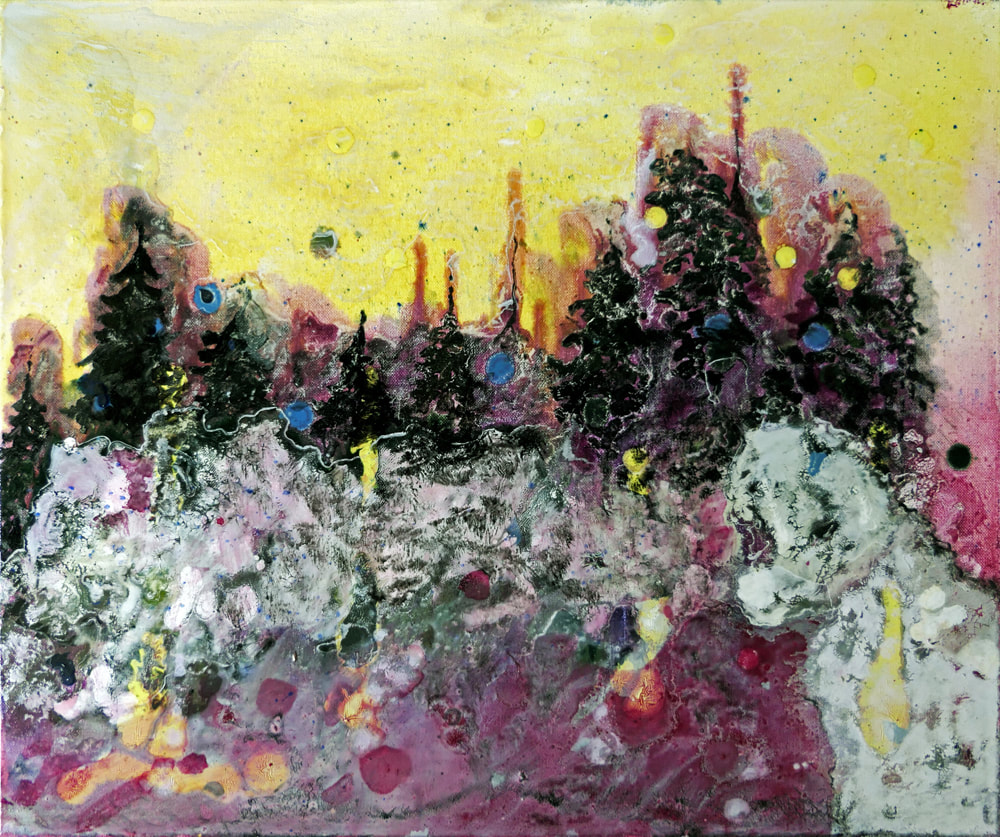 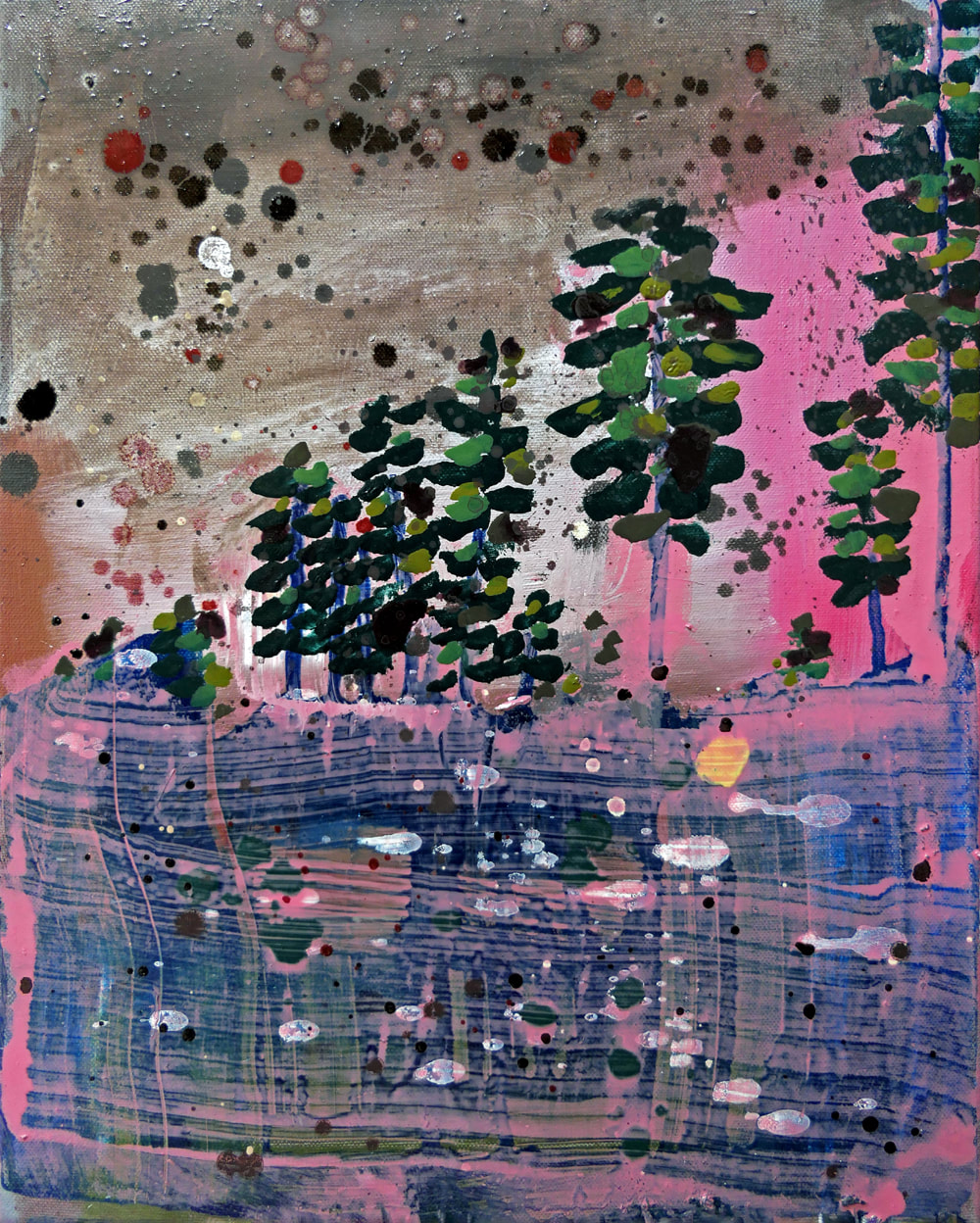 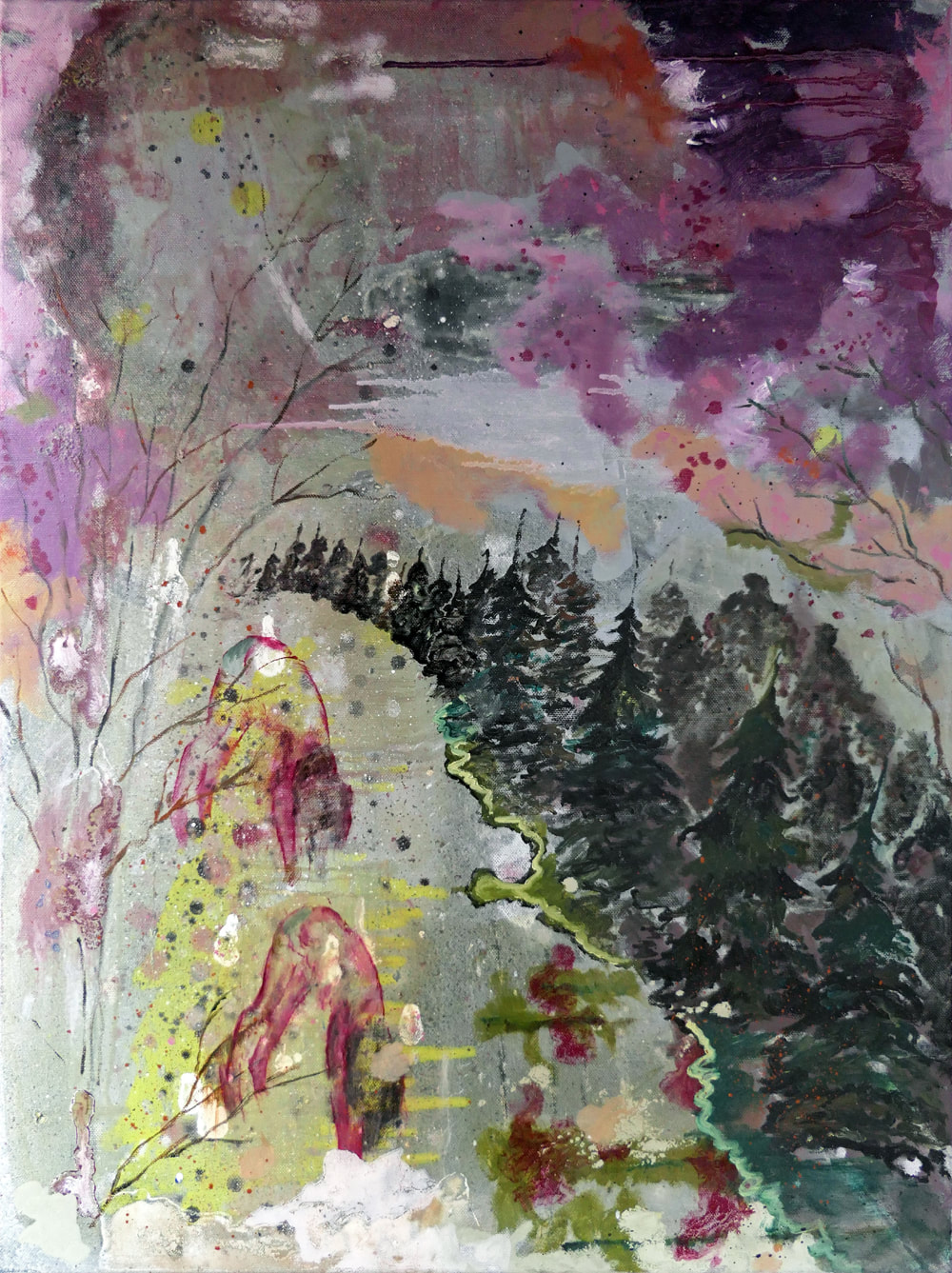 The Art Of Flying High Together, oil on canvas, 80 x 60cm 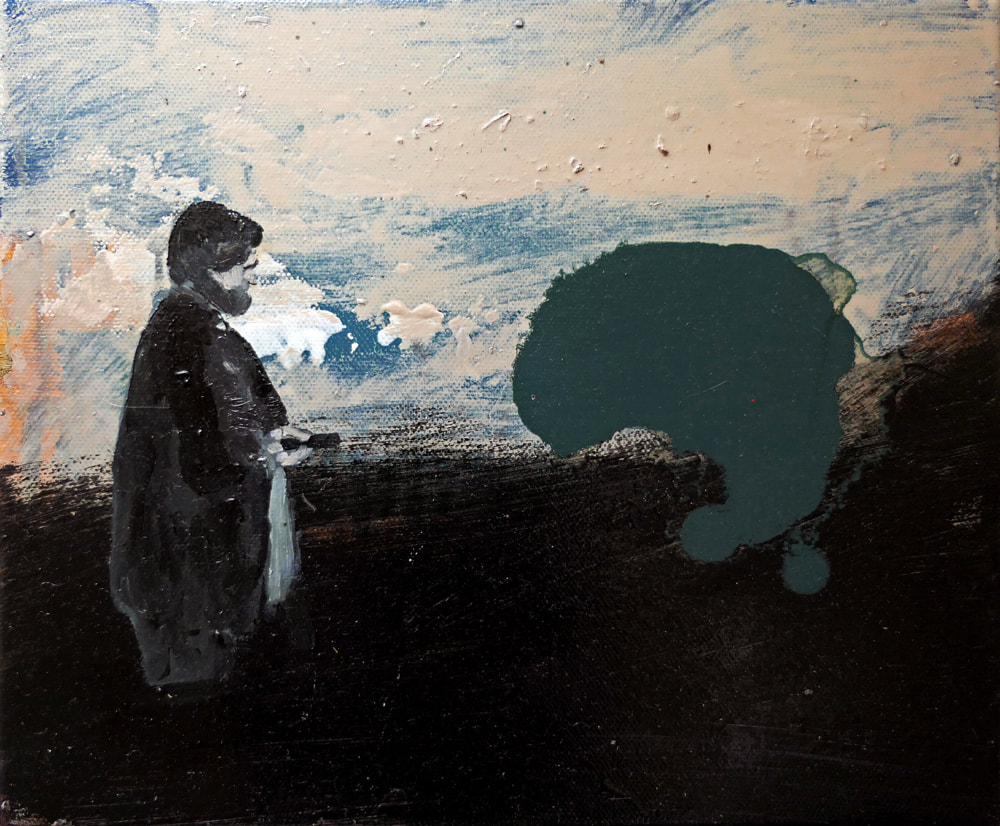